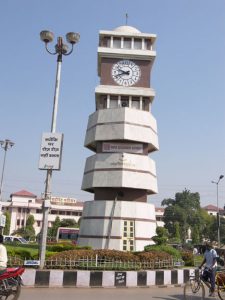 Singing Clock i.e. Town Clock (Nagar Ghadi) established by Raipur Development Authority (RDA) in State Capital is a new identity of Chhattisgarhi Folk Culture which provides 24 different tunes at the strike of every hour highlighting the rich Chhattisgarh Folk Music. An initiative to imbibe 24 Folk Song of Chhattisgarh in the Town Clock is a novel attempt towards promotion of Folk Culture in the entire World. The melodious folk music every hour is an expression of Chhatisgarh Folk Culture. The record for The Biggest Town Clock was achieved by Raipur Development Authority. The city clock measures 15 m high and 1.8 m in radius is made up of concrete. It was installed in front of Collector’s Office, near Mantralaya at Raipur (Chattisgarh) on 19 December 1995.Since January 2008 the clock plays Chattisgarh folk song every hour lasting for about 25-30 second.