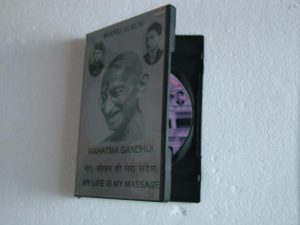 Jayesh Hinglajiya ( born on January 7, 1973) of Porbandar, Gujarat made a musical photo film titled Gandhi Katha Photo Film containing 437 photos of Mahatama Gandhi showing his life from birth to death .The film was shown during the five days of Janmashtami Mela in August 2012 in cinema hall and was seen by about 3,00,000 people.