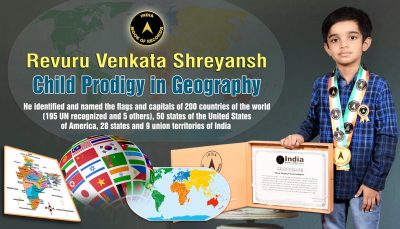 The record for being a Child Prodigy in Geography was set by Revuru Venkata Shreyansh (born on August 16, 2013) of Nellore, Andhra Pradesh. He identified and named the flags and capitals of 200 countries of the world (195 UN recognized and 5 others), 50 states of the United States of America, 28 states and 9 union territories of India. He also identified 12 largest countries by area, 7 continents with the country names in each continent and 5 Oceans at the young age of 6 years and 11 months, as confirmed on August 14, 2020.

Fastest recitation of Aathichudi in Tamil