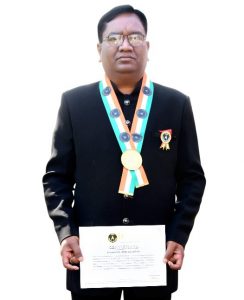 The record for doing an espousal work for the nation was set by Doman Singh (born on December 12, 1966) Collector of Korea District, Chhattisgarh. After his joining as a Collector, he appealed to the people of Korea district to sing the National Anthem before starting their work in Schools, Colleges, Offices, Courts and other Government premises. It shows the nationalism of the people for the Indian army and the nation at large. The record stands confirmed on September 18, 2019.