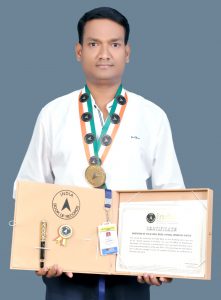 The record for inventing the Holy Basil herbal drinking water, ‘tulsi’, was set by Dr. Harishchandra S B (born on July 22, 1982) of Kalaburagi, Karnataka. He invented a multipurpose and non-toxic drinking water with medicinal qualities in the year 2017. This water has no side effects and is effective enough to cure 15 common diseases, as confirmed on November 25, 2019.

END_OF_DOCUMENT_TOKEN_TO_BE_REPLACED

THE FIRST COUPLE CONFERRED WITH DOCTORATE DEGREE ON THE SAME DAY The record for the first couple to be conferred with the Ph.D. degree in Philosophy on the same day was achieved by Dr. K. L. Dhingra and Dr. Neelam Dhingra at Manav Rachna International Institute of Research and Studies in Faridabad, Haryana on November 16, 2018.

END_OF_DOCUMENT_TOKEN_TO_BE_REPLACED The record for being a versatile musician was set by Mukesh Sharma (born on March 6, 1961) of Indore, Madhya Pradesh. He can play 10 instrumental beats through his mouth while singing the song. The record stands confirmed on September 6, 2019.

END_OF_DOCUMENT_TOKEN_TO_BE_REPLACED

SPARSE DIAMOND OWNED BY A QUADRAGENARIAN The record for owning the sparse diamond was set by a quadragenarian, Uday Venkatesh Shet (born on January 3, 1970) of Uttara Kannada, Karnataka. The diamond has distinct and sparse Jesus cross mark inside it, as confirmed on September 12, 2019.

END_OF_DOCUMENT_TOKEN_TO_BE_REPLACED The record for growing distinct insulin plant (Costus Igneus) having 24 plantlet was set by Ram Dass Gautam (born on July 24, 1950) of Pitampura, Delhi, as confirmed on August 13, 2019.

END_OF_DOCUMENT_TOKEN_TO_BE_REPLACED

CALCULATION OF ALPHABET DIGITS SUM FOR GIVEN SENTENCES END_OF_DOCUMENT_TOKEN_TO_BE_REPLACED

MAXIMUM VEHICLES REGISTERED WITH SAME NUMBER UNDER A SINGLE SERIES The maximum number of vehicles registered under a single series with the same registration number is 21 and this record was set by Saurabh Jasoria and his family from Agra, Uttar Pradesh. They are in possession of registration numbers from UP80EB 0003 to UP80EZ 0003, barring UP80EI, UP80EO, UP80EG and UP80ET. This record stands confirmed on June 12, 2019. The record for conducting the first Bollywood dance workshop for hearing impaired children was achieved by Priyanki Patel (born on June 23, 1988) of Surat, Gujarat, wherein 60 students of School for Deaf-Mutes Society attended the three days dance workshop conducted at school premises from November 28 to 30, 2018.